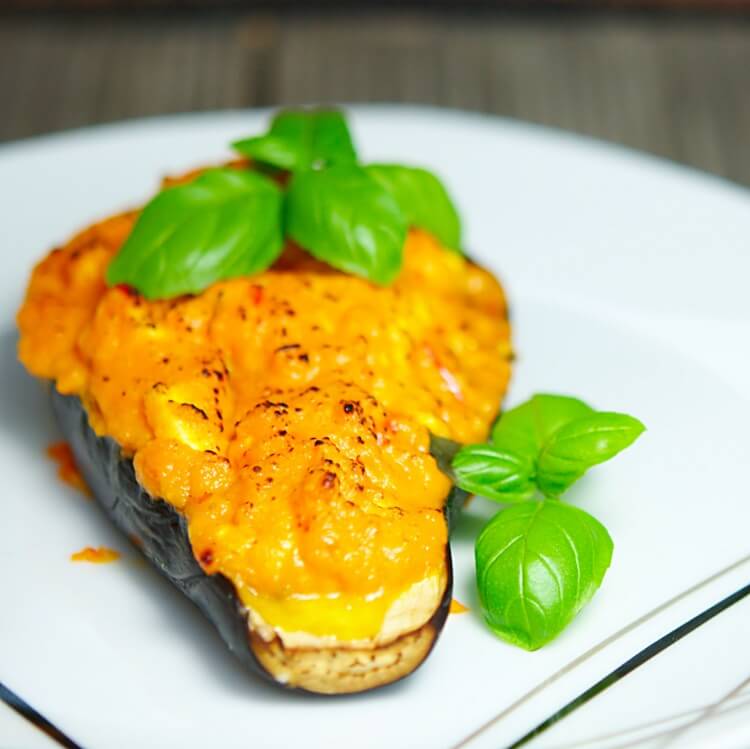 Since I ate Papoutsakia the first time, it is the best dish you can make from eggplant. The mixture of savory meat and the sweet seasoning with cinnamon  goes perfectly together with the taste of grilled eggplant.

First of all we will wash the potato and cook it in a pot for about 30 minutes until a soft consistency is reached.

Meanwhile you have to cut the eggplant lengthwise into two parts. On the cut surface you carve some slits and put salt onto it. After that put the eggplants aside until the potatoes are ready aswell.

Now you can start to cut the pepper into fine streaks and the feta into small cubes.

As soon as the sweet-potatoes are soft-boiled take them out of the water and let them cool down. Meanwhile you should rinse out the eggplant and free it from the salt. Then put it into the oven with the cut surface downside at 220°C. After that we have to peel the potatoes and squash it with a potato ricer into a pot with melted butter. Also add some squashed garlic. Now add the milk and heat up the puree until the desired thickness is reached. Season the puree with salt, pepper and cinnamon. Finally turn down the heat and add the feta and the red pepper.

Meanwhile also the eggplants should be cooked and ready to push in the soft pulp. The resulting pit should now be filled up with the puree. That’s it, now you just put the finished Papoutsakia into the oven at 220°C top heat for a few minutes and you are ready to serve.