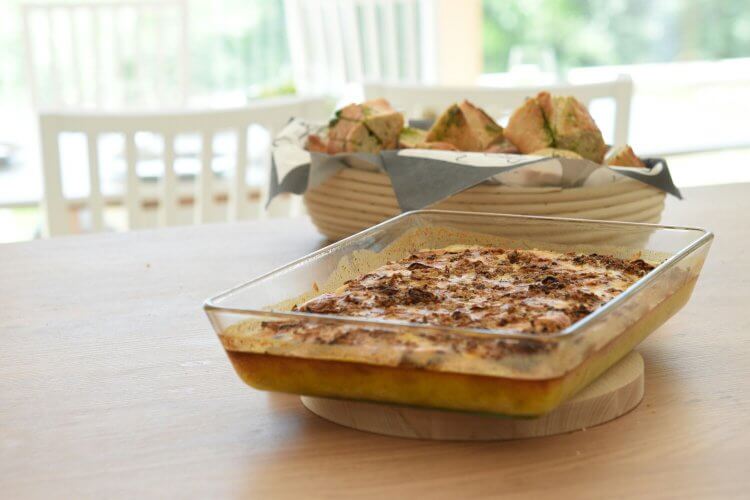 This weekend I cooked for the whole family. The motto was greek cuisine, therefore I created a dish, which I called sweetpotato saganaki and served it with herbbutter baguette and zucchini in a pastry made of beer🤤.

A few hours before we start to cook you have to prepare the prawns and put them into a marinade made out of salt, pepper, some olive oil and a lot of fresh herbs. I decided for a mixture of cilantro, thyme and parsley.

Next we’ll  start to prepare the body of the dish. Therefor we have to cut the sweetpotatos into smaller chunks and cook them until soft. Afterwards press them into a bowl with a common potato ricer.
While the potatos cool down, we’ll prepare the topping of the saganaki. Therefor we cut the onions in rings and sear them within some oliveoil. As soon as the start to get a brown color you add the whisky and flame them. Afterwards you have to immediatly add a mixture of cornstarch and flour and toss the onions well within this mixture. Again sear them until the get a good color.
Now crack the eggs into a bowl and whisk them with the chilled potatos and the cream cheese. Further you can add the cinnamon and a mixture of herbs.
Next you have to sear the prawns shortly and put them into the egg mass too. Then put the mass together with the chunked feta into a baking pan (see picture).
Now we only have to finish the dish in the oven with the grill function for about 20-30 minutes. After 10 minutes add the grated Berkäse and the whisky-flamed onions on top of the saganaki.